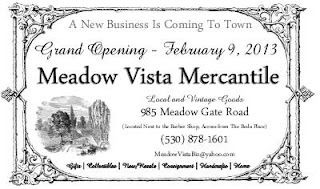 The New Year brings more protection to California homeowners, mainly those who are trying to save their properties from being repossessed.

The Homeowner Bill of Rights, signed by the governor this year, is a set of new laws that puts the onus on banks to help consumers through the foreclosure process. The new laws went into effect Jan.

The legislation, lauded by housing advocates and heavily criticized by the lending industry, forces banks to:
• Stop dual tracking, the process of starting the foreclosure process while a loan modification has been submitted or being reviewed by the bank. Borrowers in the past have lost their homes to foreclosure as a result of this situation. Under the new law, banks must give loan-modification applicants a response before starting the foreclosure process. Banks also will have to inform consumers who don't apply for a loan modification that they have the right to do so.
• Stop robo-signing, the process of approving foreclosure documents without proper review.
• Assign one point of contact to borrowers who are trying for a loan modification.
• One of the laws also allows borrowers to sue loan servicers for violating any foreclosure laws.
Some of the provisions in the package echo those in the national mortgage settlement, a deal struck earlier this year between five major lenders and 49 states, including California. The Homeowner Bill of Rights though firms up those provisions into law, which is key because the mortgage settlement terms will end in 2015.  Are you a homeowner who is underwater and needs to do a short sale? Do you want to refinance but don't know what your home is worth? Call one of your LOCAL real estate agents today! 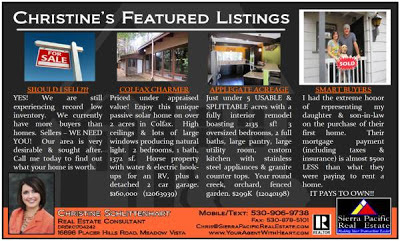 Posted by meadowvistaview at 9:45 AM