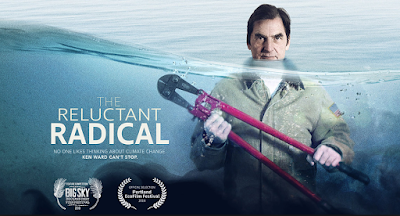 350 Placer can be found on Facebook and can be emailed at 350Placer@gmail.com.
Additional questions can be directed to David or Shandon at 530-878-2611.
Posted by meadowvistaview at 3:49 PM 1 comment:

Email ThisBlogThis!Share to TwitterShare to FacebookShare to Pinterest
Labels: 350Placer, The Reluctant Radical 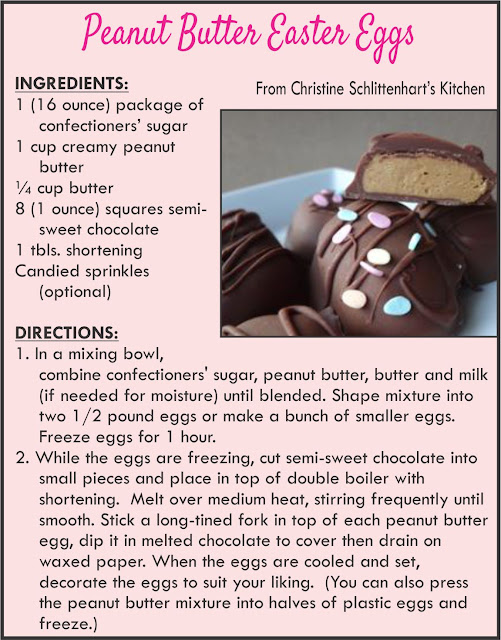 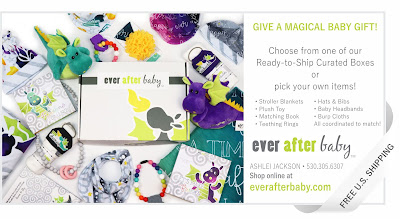 Posted by meadowvistaview at 12:43 PM No comments:

Email ThisBlogThis!Share to TwitterShare to FacebookShare to Pinterest
Labels: 2019 2 April May Issue, christine schlittenhart, Ever After Baby, recipe

Thank you to all those that supported our annual crab feed on February 2.  You made the following events possible through your support!
We are looking forward to seeing all our community youths on Saturday, April 20, 2019 at the soccer field (Placer Hills Campus play-yard).  This community Easter Egg Hunt starts at 10 a.m.  Ages 0 to 10 years are welcome to join in on the fun.  We ask that you come early since this event is over by 10:10 a.m.  Remember to bring your Easter Basket to collect eggs in.  Thank you for the assistance to the Colfax LEOs and Meadow Vista Scouts Pak and Troop 6.  The Easter Bunny said he would make a guest appearance at this event.  So bring your cameras!
On Sunday May 12, 2019 will be the Meadow Vista Lions Mother’s Day Breakfast.  Moms are FREE, family and friends are very reasonable priced.  Bring your Mom to breakfast and mingle with the community.  This event is held in the cafeteria at Sierra Hills School.  Starting time is 8 a.m.
We look forward to seeing everyone at Meadow Vista Park for Pioneer Day on June 2, 2019.
Any questions please visit our website at www.meadowvistalions.com or email us at meadowvistalionsclub@gmail.com.  Or please speak with any Meadow Vista Lions member.

Posted by meadowvistaview at 12:41 PM No comments: 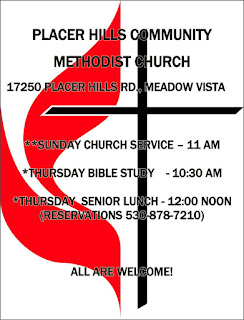 Sixty years ago my family moved from Washington State to Auburn, California.  My sister and I were babies.  My mother was searching for a church to baptize us.  She ventured out to Meadow Vista and found the Placer Hills United Methodist Church, which was the Brethren Church at that time.
As life went on, my family attended St. Pauls Lutheran Church in Auburn as it was closer to our home.  After my dad retired, my parents moved to Idaho.  Recently when they came for a visit, we were driving to the a Holiday Market and my mother pointed to the Methodist Church and said:  "that's where you and your sister were baptized".  What a surprise to find out that this cute little white church nestled in the trees was our Baptismal Church.
My husband and I as a resident of Meadow Vista had been looking to join a church.  One beautiful Sunday morning, we attended the Methodist Church, and as soon as we walked in we were greeted with kindness and a warm feeling from the people.  It was like walking back in time, sort of a "Praire Home Companion" feeling for me.  I felt like I was home.  My sister was so glad that we reconnected with the church that she and her husband drive all the way up from Lincoln every Sunday.  It's a great feeling to have this history with my church.

Posted by meadowvistaview at 12:40 PM No comments: 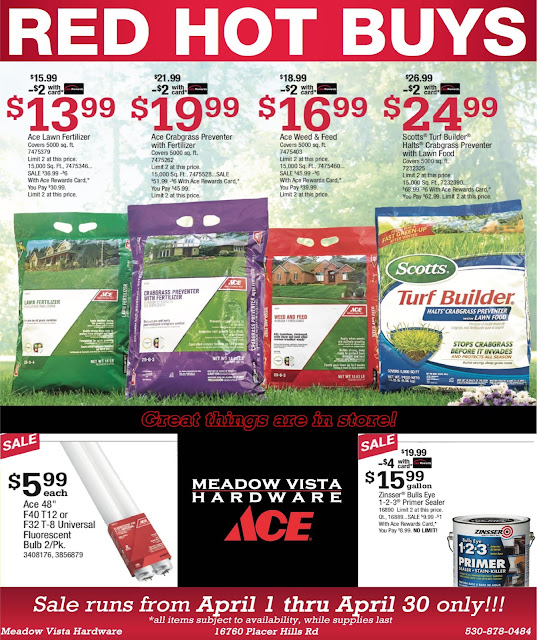 Posted by meadowvistaview at 12:39 PM No comments:

The Potential of Seeds

When you pour a handful of seed out of its paper packet, you hold the potential for the coming harvest - seemingly endless leaves of chard, a summer’s worth of tomatoes, too many eggplants to count. Turning the seed over in your fingers, it’s hard to imagine the bounty something so small will bring. The seed is infinitesimal, yet it holds the code of growth for itself, and nourishment for those who eat of its fruit, its vegetation. The right soil conditions, the proper amount of sun and water, shelter from the late snaps of cold are all the seed needs to activate itself, pushing a sprout through its coating to reach upward through the earth toward the light.
We are all capable of this care - it doesn’t take special training, although a green thumb might help make your plants a bit more productive. Life wants to grow, and it is already more than capable of doing so without our help, and even in spite of the disruption we cause to our environment. Tending to the growth of plants is our birthright, and when we look out at the landscape in our community we see that very fertility surrounding us.
The seed is a tiny book containing all the information necessary on how to grow into one specific plant. A collection of seeds is a library, each seed useful and instructive in its own way. The spring reminds each of us on the farm or in the garden of the power of smallness, something we must care for and keep from generation to generation if we are to continue feeding ourselves.
Now is the time to start seeds of your own indoors and keep them well-watered on a sunny, warm windowsill until we have seen the last of the cold nights. For any questions related to starting seeds, preparing garden beds, transplanting seedlings, or anything between, email info@foothillrootsfarm.com to ask a farmer. We’ll share our tips and tricks to maximize your garden in the next issue of The View. 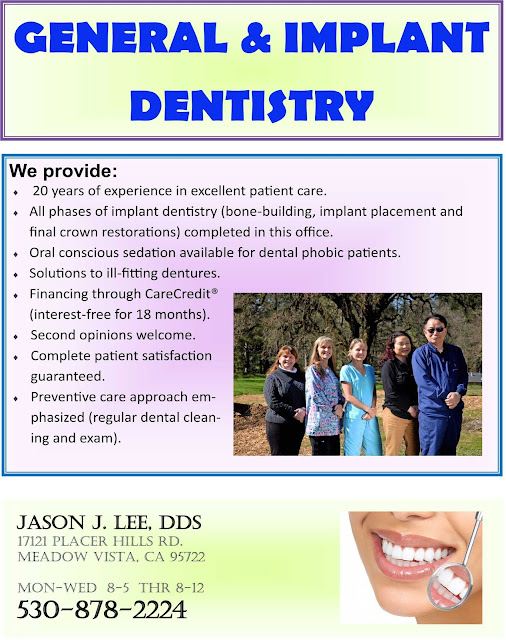 Posted by meadowvistaview at 12:37 PM No comments: 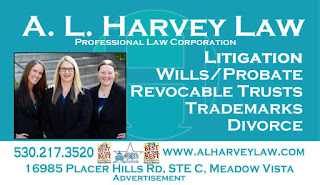 The Meadow Vista Friendly Neighbors Club installed our 2019 officers at the beginning of the year during a lovely ceremony at the Winchester Country Club.  Our officers are:  President, Margo Lambert; Vice President, Etta Gross; Recording Secretary, Rhoda Martin; Corresponding Secretary, Diane Meran; and Treasurer, Sharon Bradford.  We are grateful to these ladies for their service and wish them well as they guide our club this year.
The Friendly Neighbors held our annual Easter See's Candy Sale earlier in April.  This is an important fundraiser for our club and we are very grateful to our wonderful community for the support we have received. We are grateful to Holiday Market and its manager, Joel, for allowing us to “set up shop” in front of the market!
The Friendly Neighbors will be participating in Pioneer Day again this year.  This is a wonderful community event and a great way for us to let our community know how much we appreciate it.  We'll march in the parade and hold a free raffle for gas at our booth in the park.  So, stop by our booth to say “Hello” and enter this fun, free raffle.
We are excited to be able to again offer free swim days at the Community Pool this Summer.  The exact dates will be announced shortly.  These free swim days are open to everyone so please come and enjoy the pool during one of the swim days – it's our treat!
The Friendly Neighbors meet at the Faith Lutheran Church on Combie Road in Meadow Vista on the fourth Wednesday of each month (with a few exceptions).  Social time begins at 11:30 AM with a complementary lunch served at Noon.  Our meeting follows lunch.  Community members interested in our work are invited and encouraged to attend and join us in our efforts to serve our wonderful community. If you would like more information, you can visit our website www.meadowvistafriendlyneighbors.com or send a message and someone will get back to you quickly. 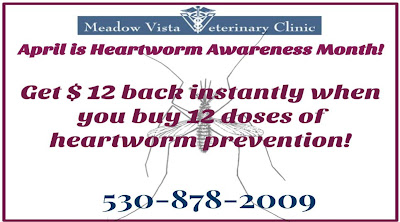 Posted by meadowvistaview at 12:36 PM No comments: