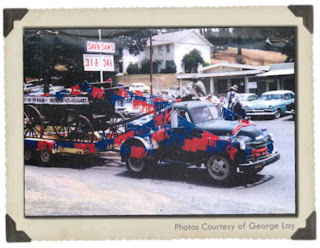 Although the department was started in the summer of 1949, the first annual picnic and parade was July 4, 1959.  Bob de Caro, the local gunsmith and fireman started talking about having a parade downtown.  The fire chief was Cliff Ramos (grocery storeowner and Meadow Vista's first Postmaster).  A committee was formed and all the volunteer firemen along with their wives organized the event.
It was decided to serve German sausage, sauerkraut, wieners, chili beans, coffee and punch.  Tickets were $1.00, which included the dinner.
The first fire department queen contest required each girl to sell tickets at 25 cents each with all proceeds going to the fire department for equipment.  The local merchants assisted by sponsoring the following girls:  Marles Halstead--Meadow Vista Lunch; Sandra DavisPenny's Beauty Shop Clipper Gap; Judy OglesbeeCoy's Service Station or Jean's Beauty Shop; Beverly LumanDick's Meat Market; Geraldine WegmannMeadow Vista Grocery; Pat SmithMeadow Vista Variety and Gun Shop. 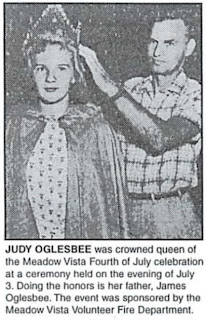 The parade started at 10:00 am at Meadow Vista Road and proceeded up Placer Hills Road.  The festivities were at the original Recreation Park on the north side of Meadow Lane, beginning at 11:00 with the dinner.  The $1.00 ticket also included games such as baseball, horseshoes and swimming.  Booths were set up to sell ice cream bars, soft drinks, hot dogs and ice cold watermelon.  Also included for the dollar ticket were prizes such as a 21” black and white TV set, coffee maker, merchandise orders, gasoline, horse bridle, hair-dos and more  all donated by local merchants from Auburn to Colfax.
The following is a great account of the event as written by Ann Oglesbee who at that time was the pen behind the Meadow Vista Versions column.  And yes, it was her daughter who was the Queen and is still in the area:
“The Fourth of July festivities sponsored by the local fire department were quite successful and everyone attending had a gay time.  The celebration started with the crowning of the queen on Friday evening and ended on Saturday evening after a day of feasting, games and social time.
Judy Oglesbee won the queen contest with Geraldine Wegmann and Beverly Luman as close runners-up.  The latter two girls served as princesses.  Judy was crowned by her father, Jim Oglesbee, and presented with a lovely watch by Fire Chief Cliff Ramos.  All the girls were given a set of jewelry as a token of appreciation from the fire department.  Master of ceremonies for this event was Bob de Caro, general chairman.
Saturday morning the fun started with a parade which formed at Meadow Vista Road and progressed to Placer Hills Road and then to the Fire House.  It was led by Donna Maize on her horse who served as flag bearer and after the flag came the big fire truck driven by Sandy Chamberlain.  The queen and princesses rode on the truck, as did little Denise Moore who was dressed in a patriotic red, white and blue costume.
After this came a Stanley Steamer puffing along, causing a burst of steam every now and then and adding much to the enjoyment of all.  On the back of the truck sat a man petting a skunk.  Also adding to the fun were the Paddy Wagon, George Lay as a prospector with his mule, an ancient red vehicle, covered wagon, and several other entries besides many beautiful horses and their riders.
We feel this was a parade to be proud of and we hope that the years to come will bring bigger and better ones.  Jim Hills and his P.A. system did much to help the parade and also furnished music throughout the day at the picnic.
The fire department would like to thank all the merchants who donated prizes for the drawings and games, and the people outside the department who so generously helped with time and labor, sheriff deputies George Struble and Robert Murray, the Recreation Department and Placer Hills School for their cooperation.
Winners of the parade entries will be in the column next week.  One of the things we noticed
About this whole affair was the fun and good humor of everyone attending, including the men who worked in the hot sun part of the day serving the dinner and seeing that things went smoothly.  We think these men and the women who helped them deserve a pat on the back.  Many hours have been spent by a small group to plan and carry out this project and we think they did. 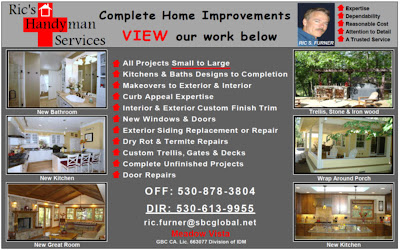 Posted by meadowvistaview at 10:18 AM