Mortgage rates are in the news more than ever.  Consumers read about the economic factors that cause mortgage rates to change but understanding those factors and really how they affect the rates is often difficult to discern.  The discussion often includes the Federal Reserve Board Chairman speaking, the national debt figure, the GDP, PPI and CPI to name a few terms but either way, it sounds like a different language  So what affects rates and why aren’t they more stable?

There is no secret formula, the mortgage rates, like the stock market are dictated by investor emotion and mass media hype. If you ignore the news reports and do a little investigating on your own and align with a mortgage professional to get their input, you will be able to take advantage of the market just like the pros.
The economic data and reports that are released at various times during the month can cause the rates to fluctuate.  Keep in mind that investors buy the bonds that mortgage rates are based upon, just like they buy stock.  Put simply, one can see that if the stock market is doing well then often bonds are not doing well because the money is being used to purchase stock and not bonds.  If bond activity is low, mortgage rates are higher.  If bonds are selling well because economic fears are high and the investor is looking for more stability, then the mortgage rates often go down.

For example, when economic reports come out stating that the US economic recovery is slowing, or that the European countries are facing economic crisis and China’s economy is slowing, then investors seek a more stable home for their investment dollars which is the US Bond, specifically the 10 year note which sets mortgage rates. As of this writing of July 25th, the experts are expecting the mortgage rate to drop.  It is important to understand that just as volatility drives the rates down, it can drive them up.  Therefore if Europe comes to a sustainable agreement regarding their economics and China makes aggressive changes in policy, the opposite can occur because emotion ultimately drives the purchasing.

Today rates are low. Will rates go up and if so how much?  No one knows but the trend is that there will not be any major changes through the end of the year. Daily “deals” are there to be gotten by watching the reports.  Work with a professional who has the understanding and technology to take advantage of the emotions of the market to lock a rate for your benefit. 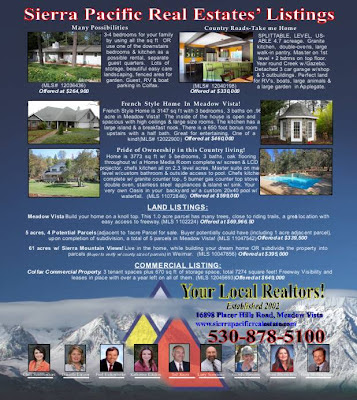 Posted by meadowvistaview at 5:00 PM