Should You Get a Flu Shot?

The flu is a respiratory infection that's caused by many different viruses.  Up to one in five people get the flu in the U.S. each year.   It comes on suddenly, causes worse symptoms than the cold, and can be serious for some people. As you know, a few years ago, a new strain of flu was thrown into the mix. Called swine flu at first, then H1N1, it caused symptoms similar to regular flu, such as fever, cough, aches, chills, and fatigue.
Did you get a flu shot last year?  If you're someone who's always thought flu shots are just for your grandparents, think again. For the 2013/14 flu season, the Centers for Disease Control and Prevention (CDC) now recommends that almost everyone get a flu shot. That is, everyone six months and older. These changes will simplify guidelines that have been confusing to many people.
Now, if you're pregnant, you may wonder if it is safe to get a flu shot. The short answer is, yes. However, this is not true if you have a severe allergy to eggs. That's because the ingredients for flu shots are grown inside eggs. Also, you should not get a vaccine if you have had a severe reaction to a flu shot in the past. If you're pregnant, request the flu shot, not the nasal spray vaccine. It is made from an inactivated virus. This makes it safe for you and your baby during pregnancy. Avoid trying to get pregnant for four weeks after a vaccination with a nasal spray vaccine.
So, when should you get a flu vaccine? Now is a good time to start thinking about it. Flu season runs from November to April. Most cases hit between the end of December and early March. The vaccine is available now and it's best to do it as early as possible so you can head off any infections "at the pass." Getting the flu shot early gives your body time to build up immunity. This means it will protect you better against the flu. 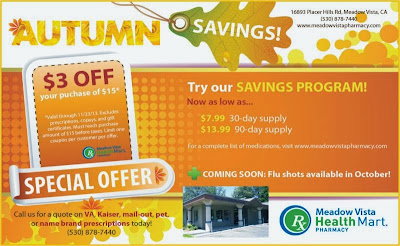 Posted by meadowvistaview at 11:14 AM